News publications and other organizations are encouraged to reuse Direct Relief-published content for free under a Creative Commons License (Attribution-Non-Commercial-No Derivatives 4.0 International), given the republisher complies with the requirements identified below.

Unless stated otherwise, images shot by Direct Relief may be republished for non-commercial purposes with proper attribution, given the republisher complies with the requirements identified below.

Direct Relief often contracts with freelance photographers who usually, but not always, allow their work to be published by Direct Relief’s media partners. Contact Direct Relief for permission to use images in which Direct Relief is not credited in the caption by clicking here. 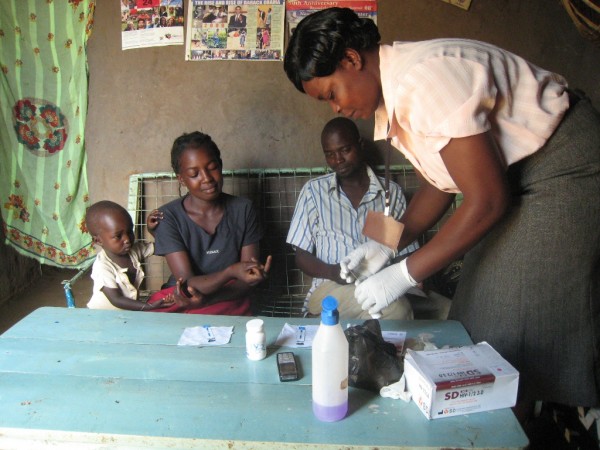 Every day, approximately 1,000 children worldwide become infected with HIV, over 90 percent through mother-to-child transmission during pregnancy, delivery, or breastfeeding. But with appropriate care and treatment, the rate of HIV transmission from mother to child can be reduced to less than 5 percent.

HIV testing for pregnant women and ensuring that women know their status is the first step in stopping the spread of the virus from mother to child.  Since 2002, the Determine® Donation Program has provided rapid HIV tests free of charge to Ministries of Health and non-governmental organizations providing HIV testing and counseling services in 43 developing countries.

With only 29 percent of pregnant women in sub-Saharan Africa receiving an HIV test in 2009, the Determine Donation Program is working to eliminate barriers to the testing of pregnant women, their spouses and children, in countries where mothers and their children face the biggest threat.

About the Determine® HIV-1/2 Test

Determine® HIV-1/2 is an easy-to-use, rapid (15-minute) test for HIV antibodies developed by Abbott. Using a small amount of whole blood, serum or plasma collected by a finger prick, any hospital or remote setting can generate highly accurate results regardless of its access to laboratory equipment or electricity. Determine HIV-1/2 may be stored at room temperature.

No test provides absolute assurance that a sample does not contain low levels of antibodies to HIV such as those present at a very early stage of infection. Therefore a negative result at any time does not preclude the possibility of exposure to or infection with HIV. Positive specimens should be retested using another method and the results should be considered in light of the overall clinical evaluation before a diagnosis is made.

Note: Determine HIV-1/2 is not currently available in the United States. Under this program, only pregnant women will be tested. Determine is not indicated for children under 15 months.

In June 2012, Direct Relief, Abbott, and its foundation the Abbott Fund, announced a major milestone of distributing 20 million rapid HIV tests free of charge to testing and counseling programs serving pregnant women and their families in 43 countries.

To facilitate access testing in order to prevent mother-to-child transmission of HIV, Abbott and the Abbott Fund made a commitment in 2002 to donate 20 million rapid HIV tests to programs in the world’s Least Developed Countries. Since 2007, Abbott and the Abbott Fund have partnered with Direct Relief to coordinate the program.  To date, more than 150 partner organizations have participated in the program, serving more than 8,000 health facilities.

HIV-positive mothers identified through the program can receive free and convenient therapy to help prevent their child from being infected with HIV.  As a result, a minimum of 150,000 new cases of HIV have been averted in infants over the past ten years.