Chronic Disease and Mental Health are Linked. But How?

Chronic disease and poor mental health are both prevalent conditions that share a complicated relationship. While the two have been shown to be highly correlated, scientists are still exploring exactly how.

The link is believed to be bi-directional, meaning both contribute to one another. Research by the U.S. Centers for Disease Control and Prevention shows nearly one-third of patients diagnosed with diabetes also experience depression, while those with depression are at higher risk of developing a chronic condition, according to the National Institute of Mental Health.

The relationship is often attributed to behavioral factors, such as diet and exercise. But scientists say physiological changes due to depression and chronic disease could also play a role. “For a long time… it was thought that whatever happens in the body stays in the body,” said Dr. Alan Kim Johnson, a professor of health psychology at the University of Iowa. But now, researchers have shown “profound communication between the brain and the body,” said Johnson.

As theories on what causes these comorbid conditions develop, so has treatment. “In our culture, we really split people apart,” said Dr. Tim Derstine, a consulting psychiatrist at Centre Volunteers in Medicine. Derstine is involved in the clinic’s effort to integrate mental health services and chronic disease care. “We try to look at it from 360-degrees,” said Derstine.

On this episode of the podcast, we explore the relationship between mental health and chronic disease and speak with providers who are integrating therapies to more effectively treat their patients.

Centre Volunteers in Medicine (CVIM) is one of eight health facilities to receive funding through the Teva Enhancing Access2Care Program — a joint initiative sponsored by Direct Relief and Teva Pharmaceuticals. Since launching in 2017, the program has provided more than $450,000 to health centers and clinics taking innovative approaches to care. At CVIM, funding has been used to integrate behavioral health checks into primary care appointments, expanding access to mental health services for patients who are low-income or uninsured. The clinic is currently in the process of analyzing data on the effects of treatment integration.

While mental health and chronic disease are closely connected, scientists are still figuring out precisely how. But one thing is clear:

LANDERS-NOLAN: “The more trauma a person experiences, the higher likelihood they will acquire or experience significant chronic health conditions.”

Geoffrey Landers-Nolan is a licensed professional counselor at Centre Volunteers in Medicine in central Pennsylvania. He specializes in interpersonal trauma, including domestic and sexual violence.

RAFANELLI: “So in, in your patients that have experienced trauma and are going through depression, anxiety do you see high rates of chronic disease?

LANDERS-NOLAN: For sure. Yeah. And with trauma, especially. The link between traumatic experiences and chronic disease should be extremely well-known.”

LANDERS-NOLAN: “The physiological and physical impacts from experiencing depression and experiencing lots of other impacts post-trauma can lead to serious health consequences down the line. They end up kind of multiplying each other.”

The correlation between the two is often chalked up to behavior. When someone is depressed or anxious, they may stop exercising or eating less healthy. Conversely, if someone has a chronic condition, they may experience negative thoughts or worries that can lead to anxiety or depression.

But what if there’s more than behavior at work? Can chronic disease induce depression? Can depression cause disease?

I put the question to Dr. Alan Kim Johnson, a professor of health psychology at the University of Iowa.

He says inflammation is the common denominator. When the body is stressed, inflammatory chemicals are sent to both the body and brain.

JOHNSON: So our interest was to develop an animal model that would see if we saw signs of depression in the animal if we manipulated the heart. In other words, we can experimentally induce heart failure or heart disease and study the animal in terms of their behavioral changes that would be indicative of depression. We studied rats, so that’s not to say rats show all the kinds of signs and symptoms that are necessary to meet the criteria for major depression.

But one of the things that is able to be quantified in animal research is something called the hedonic state. In other words, how the animal responds to pleasurable situations like a sweet solution or rewarding brain stimulation. You put an electrode in particular areas and they’ll respond for positive reward. And we have to assume that poor little guy didn’t know much about his immortality being compromised. So what we found was that indeed with heart failure, the animals go anhedonic. In other words, that means a failure to experience pleasure to something normal.

And when we asked the question, well, if we induce psychological depression in animals do we see signs of heart disease, cardiovascular disease? And we can do that. There are a lot of models. There’s an experimental model, where very minor kind of little annoyances are presented to the animal.

For example, you put an animal in an environment for a few hours and flash a strobe light. Or you present, randomly what’s called white noise, or deprive an animal for a short period of time of water and then give back an empty drinking tube.

These are things we think that are probably comparable to being stuck in traffic in the morning, your morning commute, that sort of thing. So nothing is severe at all. I mean, nothing that would create tissue damage. And so, it takes about four weeks for the animals to become significantly anhedonic.

In other words, we test them once a week for their intake of sugar and we see that decline over time as compared to control animals. And then when we look to see if this has any effect on their cardiac function, we find that the animals are more susceptible to cardiac arrhythmias. That would be a sign of heart malfunction. And so it works both ways.

RAFANELLI: Why were the rats more susceptible to cardiac malfunction? What was the mechanism?

JOHNSON: Well, at this point, we never pursued that further, but the likelihood is that one of the things that occurs because of stress–major stress, minor stress–is activation of our sympathetic nervous system. If you had psych one, you probably heard about the fight flight response, right? So you know the cardiac sympathetic nervous system controls our heart rate. And sympathetic activation increases the rate that the heart beats and increases the activity to blood vessels whose diameter is important for controlling blood pressure.

While chronic disease and mental health are interconnected, they’re often treated separately. Primary care physicians prescribe chronic disease medication while psychiatrists prescribe anti-depressants. But if the two are linked, integrating treatment could be an effective route.

To better understand the debate, I spoke with Timothy Derstine, a psychiatrist at Centre Volunteers in Medicine.

DERSTINE: I’m an adult and addiction psychiatrist, and I’m a consulting psychiatrist to CVIM, Centre Volunteers in Medicine.

Many of his patients also have a chronic condition. Diabetes and hypertension are common.

DERSTINE: Yeah, it really goes both ways. So part of what I do with my patients is take a comprehensive medical history just as your primary care doctor would do. And often things come up like high blood pressure or elevated blood sugar that are not being currently managed. And so I’m often making referrals for people to see a primary care physician because they haven’t had a physical in a long time or they haven’t had blood work done for a long time or, coming into my office is the first blood pressure check they’ve had for a very long time.

So I’m helping people find primary care clinicians quite often. Just like primary care folks see patients who are not responding well for a variety of reasons because of a trigger–alcohol and mental health issues–the flip side is also true.

I see people who may have an abnormal thyroid function or other kinds of hormonal dysfunction. So, referring them for assessment is it’s very common.

RAFANELLI: What does a chronic condition like hypertension or diabetes do to the brain?

DERSTINE: That’s certainly part of our basic medical training. Just in the past, three weeks I’ve had multiple patients who have been seeing me for months or years for a variety of different things and have had difficulty with their cognition. And in these cases that I’m thinking about, it was either high blood pressure or diabetes that hadn’t been adequately controlled and caused vessel disease. In the brain, we need good blood flow and when there’s small vessel disease, for example, from inadequately treated high blood pressure or mini-strokes or things like that, that directly affects cognition.

And so the other thing I’m often doing is referring for neuro psych testing because psychiatric illness can present sometimes with difficulty with attention, concentration and focus, and so people may think, ‘Oh, it’s ADHD’ or ‘I’m depressed’ or ‘I’m anxious’ and sometimes they have a dysfunction in their brain because either the brain isn’t getting enough oxygen for whatever reason, or there’s some other medical problem going on.

Derstine says if treatment were integrated, many of these conditions could be prevented.

DERSTINE: So one of the things that I often say is people are one person and in our culture we really split people apart. There’s the drug and alcohol side, there’s a mental health side, there’s cardiology and, primary care.

We’re one person, whether we have the psychiatric side, so to speak, or the drug and alcohol side or the medical side. I think we really need to be working on integration and communication across those different domains because often one hand doesn’t know what the other hand is doing and the person who’s in the middle ends up suffering for lack of coordination and communication around them. 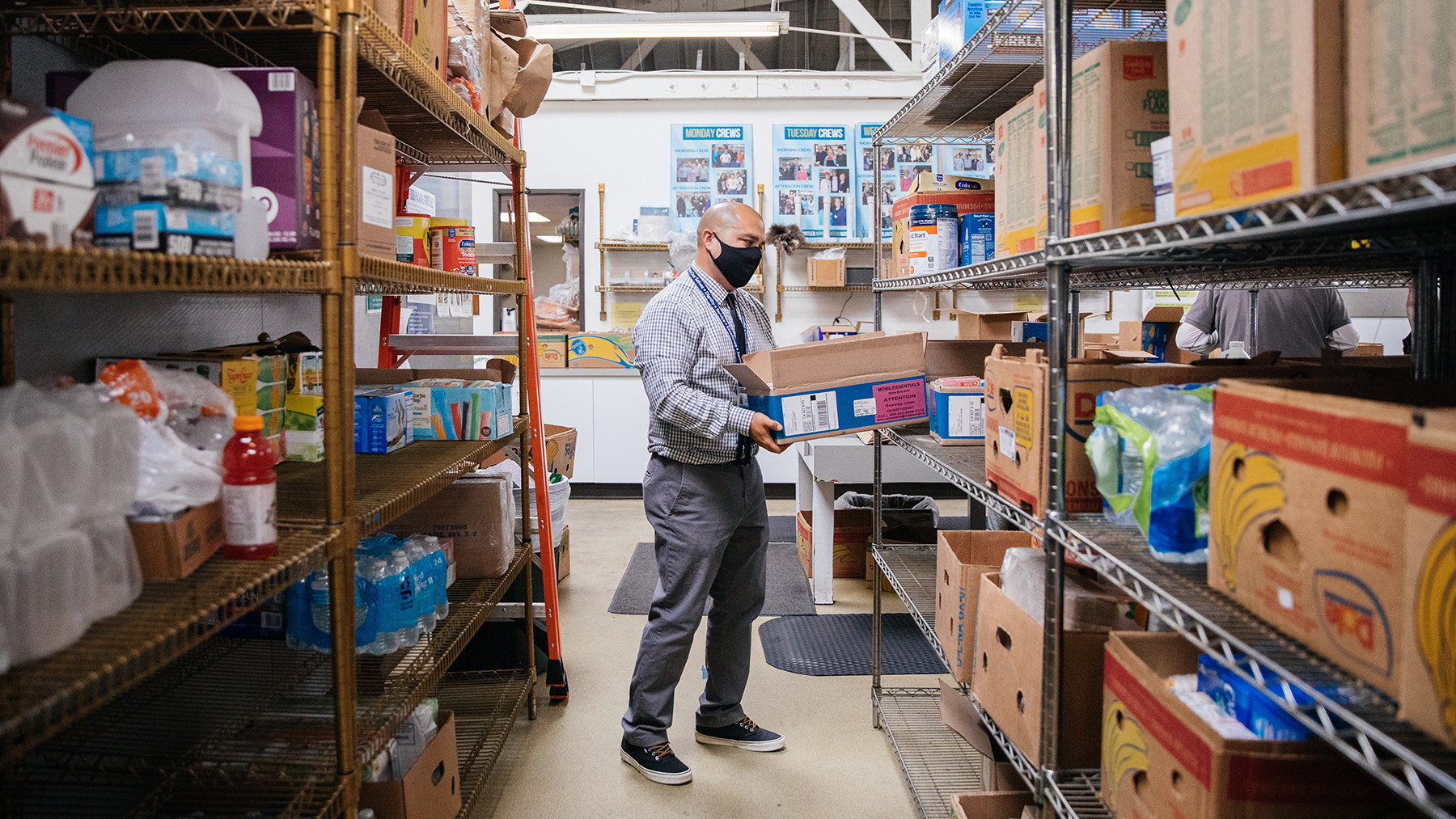