Prior to 1994, Category 5 storm events were entirely unknown in this region, but warming oceans may be changing that.

In the days immediately following Cyclone Idai’s landfall outside Beira, Mozambique, news headlines around the world declared it “the worst disaster to hit the southern hemisphere,” and “Africa’s Hurricane Katrina.” They weren’t being overly alarmist.

Over 1,200 miles of Mozambique’s midsection, including some of the country’s most fertile agricultural lands, were inundated with salty flood waters just prior to harvest. Conditions now exist for one of the world’s worst food security crises.

Hundreds of people, and potentially many more, were killed in the initial impact. Tens of thousands were displaced from their homes. Thousands more structures were badly damaged or destroyed including at least 57 critical health facilities. Roads, bridges and other logistical routes were cut off for many days, severely hampering the search and rescue and relief efforts.

Long term risks from cholera, malaria and measles to safe delivery for pregnant mothers continue to rise throughout an enormous area including not only Mozambique but parts of neighboring Zimbabwe and Malawi as well.

By some estimates, at least $1 billion in property damage has been inflicted upon these three countries. Each is more poorly placed than most countries to bear the burden of sudden shocks from natural disasters, particularly tropical cyclones. In terms of financial and human costs the 2018-19 cyclone season is now the worst ever recorded for the southern Indian Ocean region.

Tropical Cyclones and Climate Change in the Southern Indian Ocean

There is little doubt about the scale of impact from Cyclone Idai. But what made this cyclone so powerful, high-impact, and in many ways unusual, relative to most of the recorded past of the southern African continent?

Southern Africa is not subject traditionally to significant cyclone events. Prior to 1994, Category 5 storm events were entirely unknown in this region, according to research published in the Southern African Journal of Science. This relative paucity of strong storm events stands in stark contrast to the northern Indian Ocean and particularly the northeastern Bay of Bengal which is one of the most active storm zones on the planet.

Unlike these more northern waters the southern Indian Ocean is a vast expanse of open water, containing far more water volume, requiring significantly more energy to heat up. This area lies closer in proximity to the Antarctic ice shelves which cool the ocean temperatures and temper the likelihood of storm occurrence. The presence of the enormous Madagascar land mass further diminishes wind shear and makes massive storm formation in the area where Idai struck even less probable.

Nevertheless, research published in the journal of the American Meteorological Society strongly indicates the presence of an unusual and accelerating warming trend throughout the western Indian Ocean over the past century. In “The Curious Case of Indian Ocean Warming,” Mathew Roxy and other authors argue that the likelihood of sea-surface temperatures at or above 28 Celsius, where storm events tend to increase in frequency and strength, has increased steadily along the entire African coastline for a complex combination of reasons. The increase in sea surface temperatures is correlated with increase since the early 1990s in the number and severity of southern African cyclones.

Cyclone Idai made landfall as a Category 3 storm, which would have been serious under any scenario. What made this storm so catastrophic was the extremely high atmospheric moisture content leading to heavy rains, on top of an immediately prior storm which had already caused flooding throughout the Zambezi River basin.

Echoing many of the reasons for Hurricane Harvey’s devastation of eastern Texas in 2017, the issue with Cyclone Idai was less the presence of high winds than the sheer amount of water pushed into the area through overlapping storm systems and coastal surge over an area of low-lying topography. This is the reason for describing the post-storm landscape as a kind of “inland ocean.”

Many climate models indicate that the combination of factors making tropical cyclones more likely in the southwestern Indian Ocean which saw very few such events in the past will tend to increase over time. This means that countries like Mozambique, Malawi, Zimbabwe and South Africa are looking at a future under climate change where even within global mean temperature increases in the 1.5C range, well below what the Intergovernmental Panel on Climate Change recommends as a “safe” limit for climate change mitigation, Cyclone Idai level events must be factored regularly into the risk horizon.

How Prepared is Southern Africa for Increasing Natural Disasters?

Disaster preparedness always involves some degree of transference of present resources to reduce the risk from events that have not yet happened, in the future. To prepare for an event which hasn’t happened yet means spending scarce resources now to avert future impacts that would conceivably be far worse without the present investment in preparedness.

This is one of the key reasons why disaster preparedness is such a wrenching debate in the poorer areas of the world, like southern Africa. Countries like Mozambique and Malawi must make tough choices in terms of development priorities, with current public budgets already under “normal” scenarios being insufficient to provide adequately for necessities like full-scale vaccination, affordable housing, strong public health systems, universal access to clean water and effective sanitation. The more serious the future risk horizon looks then the more challenging these present allocation problems will appear to be.

To some degree, smart public investments can double as disaster preparedness. Basic primary health care is a good example. During the response to Cyclone Idai, public health care workers have played key roles, with local clinicians essentially being drafted dynamically into the role of “first responders.”

Likewise, the more the primary health system under non-disaster conditions can reduce exposure to health risks such as safe delivery and reduction of childhood diarrheal illness the more resilient those populations will tend to be in times of crisis. Investing in basic primary care is therefore not only smart on its own terms, it’s also a good argument for effective disaster preparedness.

Not every investment choice is the same as primary care though in terms of its dual impacts. Countries throughout southern Africa also need to build up the specialized emergency management capacities required to respond effectively to events like Cyclone Idai, regardless of how frequently those capacities may be utilized in any given year. Mozambique’s emergency management agency, INGC, has been a leader in the field, as it looks to strengthen core operational capabilities and add innovations like drone mapping which proved essential in the recent flood response by enabling rapid assessment and targeting of affected areas. Even INGC though is under-resourced compared with wealthier countries, and still has a long way to go to meet basic standards of disaster readiness. Neighboring countries are struggling perhaps even more seriously than Mozambique.

Six days following Cyclone Idai, the government of Zimbabwe announced that it had gotten the message loud and clear and would be creating for the first time a national emergency operations center in Harare. Local Government Minister July Moyo is urging rapid innovation in disaster management for Zimbabwe. “We want to set a permanent disaster management center so that we have all the information systems including the technology that other countries are now using, to predict or retrieve information when a disaster occurs,” Moyo said.

Elsewhere local, national and international groups are urging investments in early warning systems, improved training and technologies for better coordination. Broad popular education in how to react to emergency events is critical, much like public health education campaigns have helped to increase basic preparations like hand washing and vaccination. Each of these elements is crucial and should be thought of in concert as a package of interventions to boost social readiness.

International organizations can play key support roles as well, as the current cyclone response displays in abundance. Yet it’s clear that priorities in emergency resilience need to be driving from the local and national level for greatest effectiveness. Organizations like Direct Relief seek to bolster those local capacities as they develop but ultimately cannot and should not substitute for developing locally-driven resilience efforts.

As we look towards a shared future in southern Africa where events like Cyclone Idai become more likely, it’s incumbent upon us in the international community, just as for national governments, to boost key investments and innovations that will make countries like Mozambique, Zimbabwe and Malawi more resistant to the worst impacts of disasters. Even so, the immediate health and development priorities which countries must deal with on a daily basis also need to be understood in part as a way to reduce the costs of trade-offs between present needs and future risks.

Direct Relief is working with local partners to help make sure not only that current needs are met in the aftermath of Cyclone Idai, but also that we aid with rebuilding in a way that ushers in more disaster-prepared systems for the next storms. 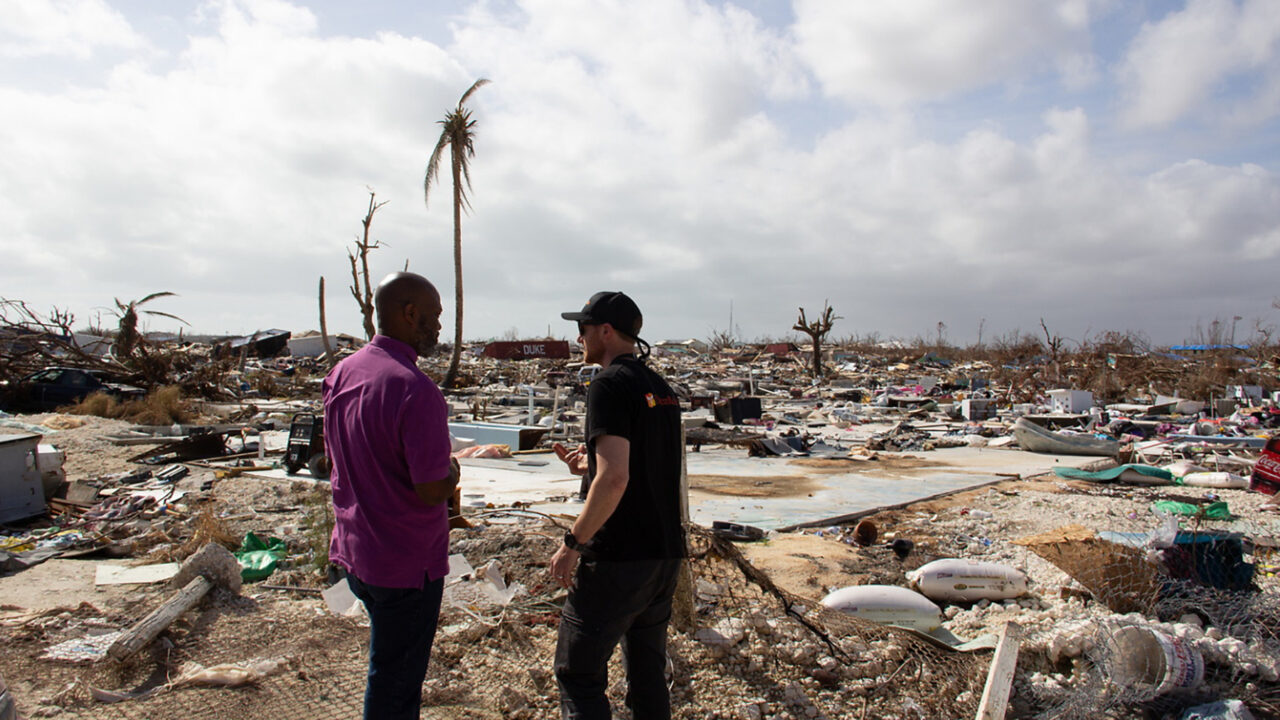