Here are 10 people, representative of thousands more across Puerto Rico, who have been working to recover and rebuild their communities since Hurricane Maria.

Since building the home in 1997, Pedro Ortiz had watched as multiple hurricanes churned through his hometown of Arroyo. But Hurricane Maria was a different kind of storm altogether.

When winds of more than 155 miles per hour ripped through the mountainous community, the home had its second story ripped off, where Ortiz, his wife and two daughters lived. They survived the storm, but their home was devastated.

Puerto Rico Housing officials estimate that more than 300,000 homes across the island were lashed by significant damage. Ortiz was one of many working to dismantle what was left of his family’s home, and start to rebuild their future.

After the hurricane struck, washed out roads and downed power lines forced Yesenia Ortiz to walk an hour and half each way to work. That’s where she manages medical records at the community’s health center, Centro Salud Familiar, in her hometown of Arroyo, Puerto Rico. As Ortiz’s parents focus on rebuilding their damaged home in the aftermath of Hurricane Maria, Yesenia’s income is the family’s primary financial support.

Health centers play a key role in disasters, and many times, staff there become first responders. Because many also live locally to where they work, they become victims themselves. Cash grants from Direct Relief’s hurricane community health fund went to clinics, allowing them to use the money for costs not otherwise covered by federal funds or insurance while staff work to bring the clinics back to full strength. Centro Salud Familiar Clinic, where Ortiz works, received a grant of $25,000 to use towards these costs.

To say that Miguel Morales is a hands-on leader in his community would be an understatement.

Shortly after Hurricane Maria swept through the mountain community of Utuado in Central Puerto Rico, Morales and other community leaders, Iván Robles and William Reyes, rolled up their sleeves. They walked up to six miles a day, clearing debris with machetes and untangling power lines.

Access to water and power remained a challenge, post-Hurricane, in Utuado. A solar laundry, funded by Direct Relief and AbbVie, was installed in Utuado, and Morales and others were instrumental, even installing the pipeline for the washing machines themselves.

When Radiologist Dr. Yania López Álvarez moved back to Puerto Rico, she gave up job offers that would have doubled her current salary.

“Job offers in the U.S. are very attractive, but I knew that I wanted to come back,” said Dr. López, who works as Director of the Imaging Center of the Medical Sciences Campus of the University of Puerto Rico and assistant professor at the UPR School of Medicine.

At the time she moved back to the island, the public health system of Puerto Rico didn’t have a program for her to apply her expertise in breast imaging, which she had practiced at the Mayo Clinic.

After Maria swept through, many of Puerto Rico’s doctors and medical professionals left the island to find work elsewhere. Dr. Lopez was determined to stay, and worked to establish Puerto Rico’s first breast imaging center. A donation from Direct Relief funded the purchase of contrast-enhanced digital mammography technology to the center.

“Having the best technology in the best place makes the sacrifices worth it because you know that you’re making difference,” said Dr. López.

In the weeks after Maria, Noel Torres would wake up each morning, well before sunrise, in a home still without electricity, to install solar in communities across the island that also lacked power.

About ten weeks later, Torres regained power in his home, but continued working long days to ensure others could experience the same thing. Torres worked to outfit several health centers with the solar energy systems they’d need to weather the next emergency, and stay operational for patients.

For Torres, switching on the lights in a home or business for the first time in weeks or months is a rewarding experience. He recalled the case of a 60-year-old resident of Aguas Buenas and his wife and two daughters, all of whom had lived months without power until Torres was able to work on their home.

“He saw the electric bulbs on and began crying,” Torres said. “I donated extra time to the installation because I wanted to help as much as I could.”

Three weeks after Maria, Alex Rodriguez went to deliver water in Orocovis, a community in central Puerto Rico that was badly impacted by the storm.

Going from house to house, Rodriguez saw that residents had a supply of single-use bottles, but no water supply to provide water for daily life. He met a 93-year-old woman, who reminded him of his own grandmother. “I thought, I have to help,” he said. “They don’t need a bottle of water, they just need water.”

Rodriguez and group, Por Los Nuestros, set to work to ensure that those communities got access to the water they needed.

The island of Vieques sits eight miles off of the coast of Puerto Rico, and is isolated even in normal times. After Hurricane Maria hit, the island became even more cut off, and its residents experienced protracted shortages of water, food and gasoline.

Dr. Ivette Perez was the only doctor working at the Centro de Salud Comunitario clinic for nearly a month after the storm made landfall.

“There was a moment where there were no medicines,” Dr. Perez recalled. “What matters in that moment is not the money, but who’s by your side. The community is what’s important.”

“We were the only ones providing care on the mountain,” she said.

Morovis Community Health Center never closed its doors to patients, even after the center’s glass doors were destroyed by 150 mile-per-hour winds. Pharmacist Nydia Torres and other staff were able to barricade the doors with plywood and the clinic kept operating.

The clinic was one of the only facilities in the mountainous region to continuously provide medical care throughout the storm.

With many people displaced after Hurricane Maria, shelters quickly popped up in places like schools or churches. Many also needed medical care, and doctors across the island worked to create pop-up clinics where medical facilities weren’t an option.

One of those doctors was Dr. Carla Rossotti. In the weeks after Maria, she and her team arrived at an elementary school housing dozens of people who’d been displaced from their homes. They quickly set up a clinic in the school’s library with medicines from Direct Relief, and saw patients for everything from high blood pressure to mental health needs. 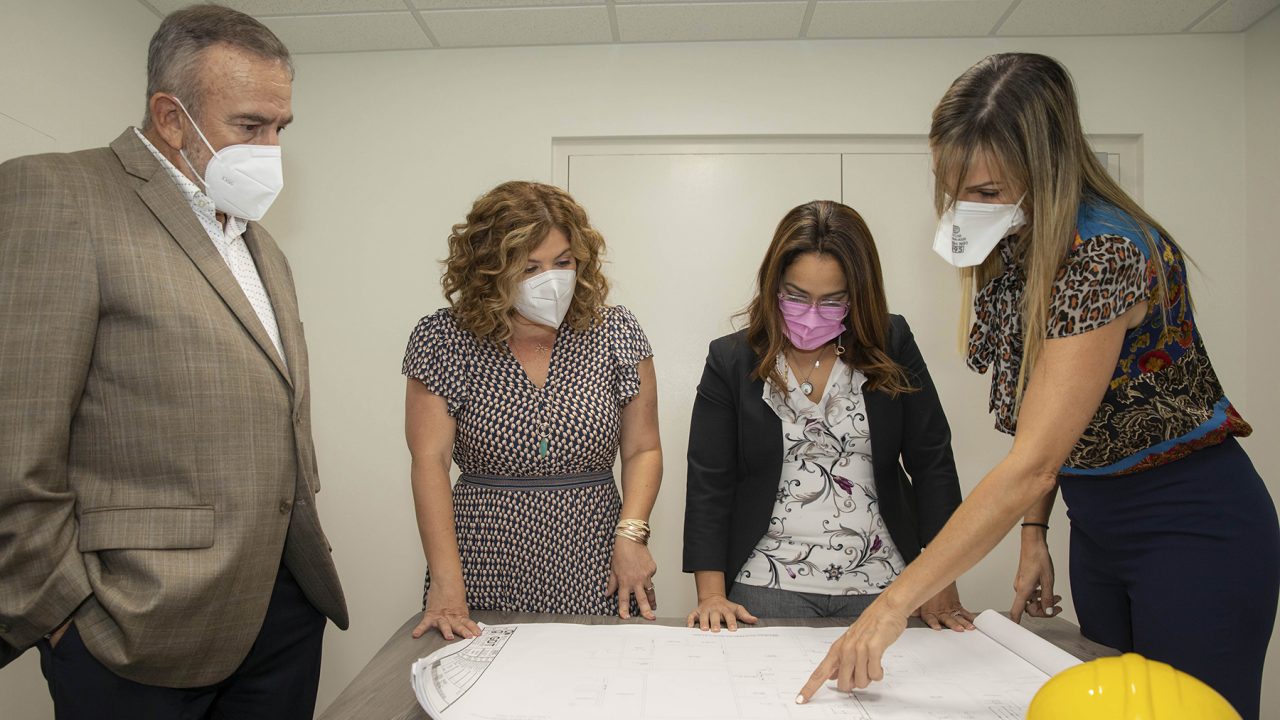